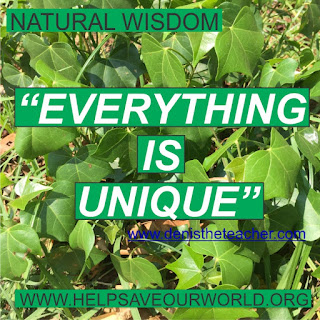 Look at each leaf in the picture above. Just like snowflakes, everything in the universe is unique and ever-changing patterns of vibrating energy movements; which are moving in and through space.
Some changes, as in the expansion and contractions of rocks and steel, are not easily noticeable because of relative movements. However, there are no absolutes, or ‘absolute things’ in the universe. No matter what people have been conditioned to think or believe. No two energy beings are the same; nor do they occupy the same unchanging space at the same time.

Desensitized, indoctrinated, fear-driven, blind-believing, unseeing, desensitized, insensitive, unthinking, unquestioning, unobservant, unaware, and unconscious, humans of this Age of Ignorance call, individual and unique expressions of life and beings: ‘things’. This is because they have lost their connection to nature and the environment, thus they have lost their appreciation or understanding of individual uniqueness in nature. They perceive the world from the basis of abstract ideas, lies, and deceptions; which have conditioned them to see the world as being composed of ‘things’, and ‘resources’. These things can be counted in ‘number’ and endlessly ‘consumed’, by the continuous growth Empires, which are pyramid scheme; which consume and gather wealth and power at the expense of all others.

This destructive value and belief system combined with lack of awareness, consciousness, natural wisdom, and enlightenment; is the cause of many of the world’s problems. As well as the destructive manner with which people live in this world and the destructive havoc they create around them.

Whereas, enlightened humans of the “New Age of Enlightenment”, knowing the true nature of the world, and the natural wisdom all around them, have a greater appreciation of all that exists, and are better prepared to live sustainably, because they are connected to the true nature of everything and understand and appreciate the true value of uniqueness. They know that every human, every animal, every plant, every leaf, every microorganism is of unique value to the ecosystems.  The also realize that the individual uniqueness, as is the case for biodiversity, increases ecosystems likelihood of survival; because of adaptability, and variety.

The leaves on a tree, when observed by the indoctrinated mind of this age of ignorance, all appear to be the same. When in fact, the discerning eye of the informed, aware, wise, and enlightened mind, to natural wisdom, appreciates individual uniqueness. They see the similarities in patterns and the differences. They see the beauty of near perfection, as well as the beauty of imperfections, the fuzziness, the roundness, the differences in growth cycles, the differences in the veins of the leaves, the movements, the changes…

They realize that the differences are apparent in the details. Just like snowflakes, there are no absolutely perfect leaves and no two leaves which are identical, nor can they be 100% the same. They can only be similar, and yet unique.
For more natural wisdom and The Feminine Revolution go to www.denistheteacher.com
For even more go to our soon to be released website: www.helpsaveourworld.org